Audrey was five years old when she was diagnosed with a rare and inoperable brain tumour. The tumour, which was about the size of a plum, was blocking the normal flow of fluid around the five-year-old’s brain causing pressure to rise inside her skull.

Within 36 hours of diagnosis, Audrey underwent surgery that could only reduce the size of the tumour, not remove it because the mass was embedded around parts of the brain that control vision and core body function.

One of the biggest challenges with childhood cancer is that the side effects of treatment that can last a lifetime. Over 90 per cent of children who survive cancer will develop at least one chronic condition resulting from their treatment. It is estimated that 30,000 people are currently living with late effects.

After discussions with their neurosurgeon, Audrey’s family found out about another treatment. It was proton beam therapy. It was not available in Australia, and it would cost the family over AUD $220,000.

The good news is the thirty rounds of proton therapy prescribed controlled the growth of Audrey’s tumour and minimised the harmful long-term effects on her learning along with her ability to live independently.

Today she’s a happy and confident ‘tween who loves school and spending time with other children on this journey with whom she finds a strong empathetic connection.

What started as unusual lump in Priya’s hand became a ghastly succession of bad news culminating in the primary schooler being diagnosed with a rare type of childhood cancer, stage IV high risk alveolar rhabdomyosarcoma.

It was in March 2015 when Vanessa was getting Priya (then aged six) ready for school that she noticed her daughter’s right hand was swollen.

The intuitive mum knew something wasn’t right so they went to the local doctor who ordered an ultrasound and x-ray that same day which lead to a referral to a paediatric hand surgeon and a request for more tests along with a surgical biopsy. The biopsy revealed the lump was a malignant tumour.

Priya was referred to Paediatric Oncologist Dr Geoff McCowage (Dr Geoff to his patients) at The Children’s Hospital at Westmead. At that point, he wasn’t sure what type of cancer Priya had. What he did know was treatment had to start immediately – her cancer had metastasised to her lungs. It meant she only had a 25 per cent chance of surviving.

Priya’s treatment included surgery, chemotherapy and radiation therapy. Despite everything the young girl went through, she kept her cheeky sense of humour in a heroic display of resilience.

In May 2016, 60 weeks after she was diagnosed, Priya’s treatment was over and she was allowed to ring the end-of-treatment bell to celebrate. It was a moment that filled the family with mixed emotions.

With that same vitality and sense of focus, Priya leapt at the opportunity to become a YPURA artist. Her proud parents said she was over the moon to be invited to submit artwork to grace the label of a new sparkling mineral water.

“She is very creative,” gushed Ravi. “She really enjoys drawing and couldn’t get to the job quick enough – she raced to get all her colours and textas out and started.” 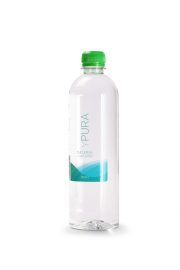